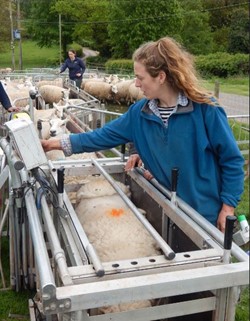 Using genetic selection to breed more efficient ewes provides a great way to improve both the profitability and the environmental credentials of your farm.

What makes an efficient ewe?

An efficient flock produces a high level of output relative to the inputs required to run it over the year. To achieve this we need to be breeding ewes that are:

Why is ewe mature weight important?

Ewe mature weight is important because although heavier ewes can produce faster growing lambs and are ultimately worth more as culls, they tend to be more expensive to feed and have to be run at a lower stocking density.

Work for AHDB by AbacusBio highlights that there is an optimum ewe size for maternal breeds that balances these gains in outputs with increases in production costs. The review proposed that the optimum ewe mature weight on many farms is around 55-65kg, though it acknowledges this will vary with farming system. You can read the full report here or watch this webinar to learn more.

Selecting purely for faster lamb growth rates (Eight Week Weight EBV and Scan Weight EBV), will lead to an increase in ewe mature weight. However, there are sheep that are ‘curve benders’, which have fast early growth and a more moderate mature weight.

Breeders can enhance this attribute by recording ewe weights with Signet and using EBVs produced for this trait to enhance their selection decisions and avoid larger increases in ewe mature size.

When to measure ewe mature weight

EBVs will be calculated for ewe mature weight and ewe body condition score records that are taken at any of three key times during the year. Initially only the pre-mating EBV will be published and this should be our main focus.

Please try and weigh your shearling and older ewes at mating time. Record differences in their management groups and where practical collect a record of body condition score, though we recognise this won’t be possible in all flocks.

It is recognised that in some fast finishing flocks, weaning may take place before 12 weeks and thus the earlier weighing event will be the “weaning” weight. This is absolutely fine.

You can submit the ewe weights online or send Signet a spreadsheet in the format you can find here.

We are in the process of updating our genetic evaluations for lowland maternal breeds with funding from CIEL and AHDB as part of the EweBenefit project.

The new evaluation will:

The new evaluation will be launched in early 2022.

To get the most from this exciting new evaluation it is important to provide the best data that you can – and this year it would be great if this could include mating weights.

What are Estimated Breeding Values (EBVs)

EBVs are an estimate of a sheep’s genetic potential for key economic traits, calculated using a sheep’s pedigree and measurements (and those of its flock mates). EBVs allow the direct comparison of sheep to be made based purely on their genetic potential and independently from their management.

The Ewe Mature Weight EBV can be used to select ewes with a moderate mature weight, while progressing performance in other traits.

Will controlling increases in ewe mature size affect the growth rate of my lambs?

This will depend how great a penalty is placed on ewe mature size within the breeding indexes that are being used. The new maternal index being developed will allow some increase in mature size, so the breeders will still be able to increase the growth rate of their lambs through selective breeding.

When is a good time to take these measures?

There are three times in the year when breeders can collect these measurements.

How should the data be submitted?

How do you get accurate data?

What can you do with additional ewe weights if you weigh more frequently?

Where can you get advice on recording body condition score (BCS)?

What happens if I can’t weigh my ewes?

Should I still weigh shearling ewes?

Yes, weigh your shearling ewes pre-mating as before. This data will be used to calculate the Shearling Ewe Weight EBV, which in turn will be correlated to the Mature Weight EBVs.

What happens if half my shearling ewes lambed as ewe lambs?

If you lambed your ewes as ewe lambs still collect a pre-mating shearling weight to produce a Shearling Ewe Weight EBV, but it is important to record the two groups of shearlings in different management groups, those that lambed and those that didn’t, so they are no directly and unfairly compared

Do I need to weigh mature males (i.e my stock rams)?

No, an EBV is calculated for rams from their female relatives. There tend to be fewer rams on individual farms and this makes useful comparisons more difficult, especially when they have been reared on different farms in different years.

In most flocks there are large enough numbers of ewes that are run together in large contemporary groups over several seasons to give us the information needed.

Is the Ewe Mature Size EBV included in the new Maternal Index for lowland breeds?

Yes, a small negative weighting has been placed on indexes of sheep whose Ewe Mature Size EBV exceeds a certain threshold value, above this the index weighting will increase to more severally penalise the largest ewes.

These ewes may still get high indexes, if their EBVs for other traits are high – but the index is lower than they would have had without the penalty. This step will help to moderate larger increases in ewe mature size, without favouring very small ewes.

What does the Maternal Index reward?

The new Maternal Index being launched for lowland maternal breeds in 2022 is designed to select the most efficient sheep. The index rewards high performing sheep in for lamb growth rates, maternal ability, muscling and body condition score while seeking to optimise prolificacy and ewe mature weight.

Which breeds are getting Ewe Mature Size EBVs?

All lowland maternal and hill breeds will be getting access to a Ewe Mature Weight EBV over the next 18 months, so they are strongly encouraged to submit weights and BCS if they can. Terminal breeders can also record these weights with a view that we may create an EBV for these traits in the future.