Out of season breeding 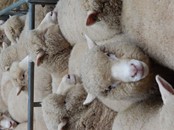 Out of season breeding

Sheep and goats that live in temperate climates are seasonal breeders, with the onset of reproductive activity triggered by shortening daylength.

In the UK the Poll Dorset/Dorset Horn is well known for being an aseasonal breeder, capable of breeding out of season, with lambing frequently taking place in September and October.

At Signet we are interested in the genetic influences upon seasonal breeding and are greatful to Liz Nabb for completing a comprehensive mini-project on the seasonality of reproduction as part of her AHDB funded PhD.