Estimated Breeding Values (EBVs) provide a measure of the breeding potential of an animal for a specific trait. They take into account performance data collected on known relatives, the relationships between performance traits (correlations) and the degree to which traits are inherited from one generation to the next (heritabilities).

EBVs are expressed in the same units as the recorded trait (e.g. kg for 200-day weight) and they relate to a common baseline (usually set in 1980).

EBVs are easy to interpret, for example:

A recorded bull will only pass on half of its genes to its calves so its EBVs must be halved in order to estimate the average genetic worth of its progeny.

Information is often presented in a bar chart format, with bars to the right indicating superior animals, those to the left indicating those with genetic merit below breed average. 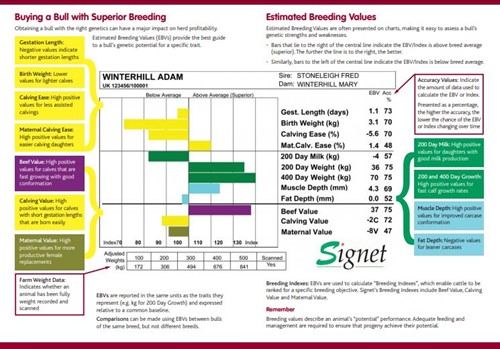 Pedigree and performance data is analysed to calculate how much of each animal’s performance is due to its breeding merit and how much is due to the environment in which it has been raised. This assessment of breeding potential is expressed as Estimated Breeding Values or EBVs.

The following EBVs are produced for Signet clients:

What is a Breeding Index?

While EBVs aid the selection of breeding stock according to specific traits they can also be combined into selection indexes to meet wider breeding objectives.

The EBVs accounted-for in the calculation of these indexes is shown below:

Indexes cannot be compared between breeds. To avoid confusion, Index values are sometimes prefixed with two letters which indicate which breeder they refer to, e.g. LM for Limousin

When using a Breeding Index it is important that your breeding objective is broadly similar to that of the Index in question, otherwise you may unwittingly change aspects of your herd that you did not necessarily want to.