A New EBV for Lamb Survival 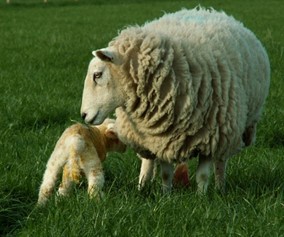 The ability to enhance this trait could have a huge impact on animal welfare and flock profitability, especially in the current economic climate where every lamb counts.

While it is recognised that the environment has a huge impact on the survivability of a ewe’s offspring, lamb survival in UK datasets has been shown to have a heritability ranging from 5-9% meaning that genetic progress be made in this trait and an EBV for lamb survival would be of use to the British sheep industry.

The genetic parameters (heritabilities and correlations to other traits) for lamb survival have been calculated from real industry datasets for the Lleyn, Dorset and Texel breeds.

The approach used by SRUC scientists is to look at the data and determine whether the lamb has survived based on the availability or otherwise of any measurements taken later in life – with the weights recorded at 8 weeks of age or scanning time being important indicators of survival. Lambs recorded with Signet that are never measured again after birth are deemed not to have survived.

The analysis requires variability to exist in individual flock contemporary groups in order to produce EBVs – so flocks with less than 5% mortality or more than 85% mortality will be excluded from the analysis.

To be included in the analysis it is vital that we have accurate animal records. This trait is only analysed in animals with sire and dam recorded, an accurate date of birth and a measurement of birth weight. A special emphasis has to be placed on birth weight as the size of the lamb at birth has a huge effect on its viability. In the Lleyn dataset, for example, about 23% of lambs have a birth weight recorded.

In a recent AHDB survey of sheep breeders across the UK, 68% of respondent’s record birth weight for all their lambs and 65% of respondents also declared that they accurately record all of their dead lambs. This is a great starting point and whilst recognising it is not always logistically possible to collect this information, the availability of a new Lamb Survival EBV may encourage more flocks to record these traits in the future.  Providing that breeders are recording lamb birth weight, no new data needs to be collected to obtain a lamb survival EBV.

If breeders can move towards routinely recording birth weights and dead lambs they could have the power to select for those genes influencing lamb survival and improve the profitability of commercial sheep production.

What do I need to do?

While the lamb survival EBV will be available to Lleyn breeders at first, there is no reason this EBV couldn’t be rolled out to other breeds in the future providing we have the following information:

For more information read this poster written by Ann McLaren and Joanne Conington, SRUC and a genetic report can be accessed here.

The new EBV has now been made avaialble to Scottish Blackface breeders, as well as Lleyn breeders.