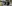 Changes to the guidelines relating to the ultrasound scanning of sheep

The use of ultrasound scanning to measure muscle and fat depth in Signet recorded flocks has been one of the great success stories of the last 30 years. The scanning services provides proxy measures for body composition in sheep breeding programmes designed to enhance carcase yield and conformation, whilst optimising fatness.

Over the last 10 years alone the Signet team have scanned over 400,000 lambs from over 30 different breeds.

When should lambs be ultrasound scanned?

Traditionally breeders have been asked to scan lambs when they reach 21 weeks of age and weighing at least 45kg. This protocol ensured that variation could be identified between individuals - particularly in terms of fat depth, optimising the accuracy of data used to produce Estimated Breeding Values (EBVs).

A number of factors mean this protocol has been reviewed

Several small studies have been completed looking at scanning sheep at younger ages.

AHDB also commissioned a more detailed piece of work undertaken by independent geneticist, Dr Janet Roden using Lleyn and Meatlinc datasets to see whether lambs could be scanned at younger ages. These breeds were chosen as they provided information on lambs reared under relatively commercial conditions.

What are the implications for Signet clients?

The key message is that breeders now have more flexibility in when they can present lambs for scanning – but they do need to use their judgement to ensure lambs are heavy enough and expressing variation in fat cover/finish.

Flocks that wish to can now scan lambs around 17 weeks of age, assuming:

This protocol will apply to terminal sire and maternal breeds. Signet’s protocol of hill breeds is unchanged as these lambs tend to be lighter and less well developed at scanning time.

What are Signet flocks doing now?

In recent years there has been a move to scan lambs at a younger age, with most of these flocks achieving satisfactory weights at this age. Some flocks are scanning lambs at lighter weights than recommended – however this doesn’t tend to be because they are young. When looking at differences between flocks, age has little bearing on scan weight – indicating the massive variation in performance that is seen between farms.

Studies looking at variation in fat depth and muscle depth also confirm that flocks with low levels of variation are more likely to be scanning lambs that are too small, rather than too young. So the message to breeders is clear, make sure lambs are well grown and heavy enough to scan rather focussing on getting them scanned at the right age.

How young can you go?

Janet’s study doesn’t make recommendations for lambs scanned younger than 17 weeks, as these are not widely represented within the datasets used – but it is logical that younger, well grown lambs can be scanned with confidence.

The main concern about scanning very young lambs is to what degree the variation in measurements expressed might be attributable to the maternal performance of a lamb’s mother as opposed to the genes of the lamb. This influence is already observed when analysing 8 week weights – where the analysis teases out direct and maternal genetic influences on lamb performance. 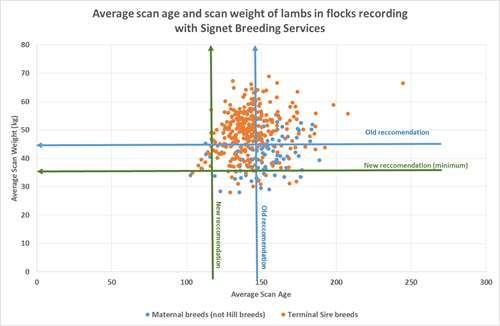 This effectively means sheep can achieve a high muscle depth EBV in two ways – being genetically very big or having a very deep muscle depth relative to their size.

Janet’s report also looked at whether genetic analyses ranked animals in the same way if data was adjusted for weight, rather than age – with a view to producing analyses that identify differences between sheep at the same weight – say 40kg live weight – rather than age.

Her provisional study indicates that when adjusting for weight, rather than age both traits are still highly heritable – but that animals do re-rank as a result of this approach. The new approach would favour animals that are very muscly for their size, rather than those that are just big. Further work at SRUC/EGENES will look at the implications of making this type of change to sheep evaluations – but with this work in mind, it may be advisable for flocks scanning lambs at very heavy weights to consider bringing their scanning age forward.

The full report can be found here