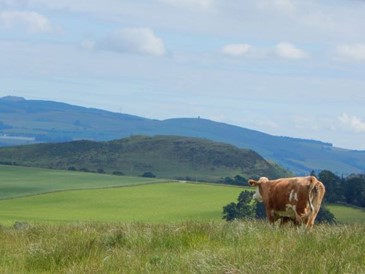 Whilst improvements in carcase conformation and fat class have been observed over the last decade, at present only 55% of prime cattle slaughtered in Britain met the target of E, U or R for conformation and 1, 2, 3 or 4L for fat class.

One means of improving carcase quality is to breed cattle with better carcase characteristics. Currently this is done indirectly through measuring growth rate and associated carcase traits on the live pedigree animal – fat depth and muscle depth/area using ultrasound. We know the value of this to be £4.9 million per annum (Amer et al., 2015).

It may be possible, however to breed directly for the traits measured in the abattoir.

A project funded by AHDB (Beef & Lamb and Dairy) and Hybu Cig Cymru (Meat Promotion Wales) and undertaken by Scotland’s Rural College (SRUC) has shown that combined with other national databases, abattoir data are suitable for producing genetic evaluations for the traits farmers are paid for.

This project assembled nearly 4 million carcase records and matched with BCMS records and other data sources created the best possible “super-pedigree” to pull the information together into a single, analysable dataset. Genetic parameters were determined and recently EBVs for carcase weight, conformation, fat class and days to slaughter for a number of beef and dairy breeds have been produced.

Heritability values (within breed) for these traits are mainly in the range of 0.2 to 0.4 which is encouraging and indicates that the use of EBVs based on commercial carcase data is not only possible, but also likely to result in good rates of genetic progress.

The project team are currently reviewing and refining the new EBVs, whilst initiating discussion on their use with breed societies.

What can producers do?

Whilst nearly 15,000 bulls have more than 10 progeny in the current analysis, the true value of this new source of genetic information is limited by the number of BCMS records where sire is accurately identified on the BCMS passport.

So the message for commercial producers is a simple one – if you want better information on which to select genetically superior sires in the future, ensure every calf born in your herd has its sire clearly and accurately recorded on its passport using the UK ministry number of the sire.